Bacteriophages are viruses that replicate in bacterial hosts. They occur naturally in nature and have shaped the bacterial world for millions of years. Certain bacteriophages infect specific types of bacteria. There are two distinct life cycles: during the “lysogenic” cycle, the bacteriophage integrates its DNA into the bacterium; the resulting “prophage” can improve the virulence of the bacterium.

Not all bacteria are susceptible to bacteriophages, as bacteria have developed the ability to become resistant to bacteriophages. Phage therapy, or phagotherapy, is the production of specific bacteriophages and their use in bacterial infection. It was Félix d’Hérelle, while at the Pasteur Institute, who first had the idea of using bacteriophages to treat bacterial infections in humans and animals. Due to the discovery of antibiotics and the development of beta-lactam production in the post-war period, phage therapy gradually disappeared in France just before the 1980s. Professor Paul Sédallian and Professor André Bertoye of the Infectious Diseases Clinic of the Croix-Rousse Hospital, part of the university hospital group, Hospices Civils de Lyon (HCL), had developed in collaboration with the Pasteur Institute of Lyon the concept of personalised phage therapy, by isolating the bacterium responsible for a complex infection in a patient, and by specifically “training” bacteriophages on this strain in the laboratory, before injecting these selected and trained bacteriophages into the patient. The history of phage therapy in Lyon is described in this article published in 2022.

Photograph of the medical team of the Infectious Diseases Clinic directed by Pr. A. Bertoye in the 1970s, in the “isolation building” of the Croix-Rousse Hospital built at the beginning of the 20th century.

Today bacteriophages are manufactured in Georgia. They are not available in France because they are not manufactured according to European standards of Good Manufacturing Practice (GMP), and can cause potentially severe reactions, due to insufficient purification, if used intravenously or directly in a joint (bacterial debris may remain). In France, a private company manufactures bacteriophages which can be used against golden staph, as well as bacteriophages against Pseudomonas aeruginosa, another bacterium. CRIOAc Lyon has collaborated with this company to develop and select the bacteriophages that are the most relevant for treating bone and joint infections (BJI). The use of therapeutic phages in Western Europe should follow the recommandations of the EMA (European Medicines Agency), to ensure the safety of the manufacturing process, and thereby the tolerance of the treatment. 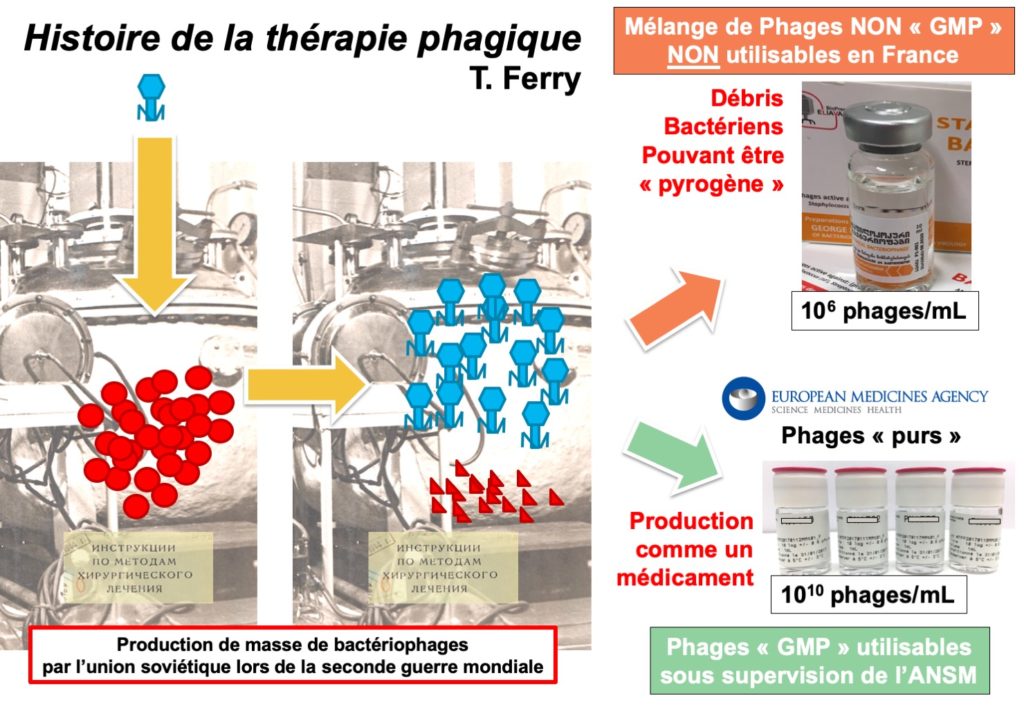 Who should receive this treatment, and under what circumstances?

In theory, it is not possible to benefit from this type of treatment, as no study has yet been carried out in France, apart from a study carried out on burn patients. As part of its mandate as Reference Centre for Complex Osteoarticular Infections, HCL (CRIOAc Lyon) have treated some patients with bone and joint infection by phage therapy, and we have reported these experiences as “clinical cases” published in international medical journals, as well as in our scientific papers. These were mainly prosthetic joint infections, mostly related to multi-resistant bacteria, patients needing salvage therapy, with new surgery and prolonged antibiotic therapy as sole solutions. Phage therapy could be provided as compassionate and exceptional use, under the supervision of the French Health Authority (ANSM).

How does the treatment work (from the patient’s point of view)?

The clinical state of the patient must be discussed during a Multidisciplinary Team Meeting at CRIOAc Lyon. Then, it is necessary to obtain the target bacteria in culture and, depending on the clinical situation and the resistance of the germ, if salvage therapy by bacteriophage is deemed necessary in an exceptionally serious situation, the decision of the French Health Authority will be requested for the implementation of the treatment. The different bacteriophages available are first tested in solid and liquid media, in order to select those that are active.

The selected bacteriophages are then sent to the Hospital Pharmacist, who is responsible for making an extemporaneous magistral preparation (the day of the operation). This personalised cocktail of bacteriophages, is then administered, during the operation, by a surgeon trained for this type of treatment. 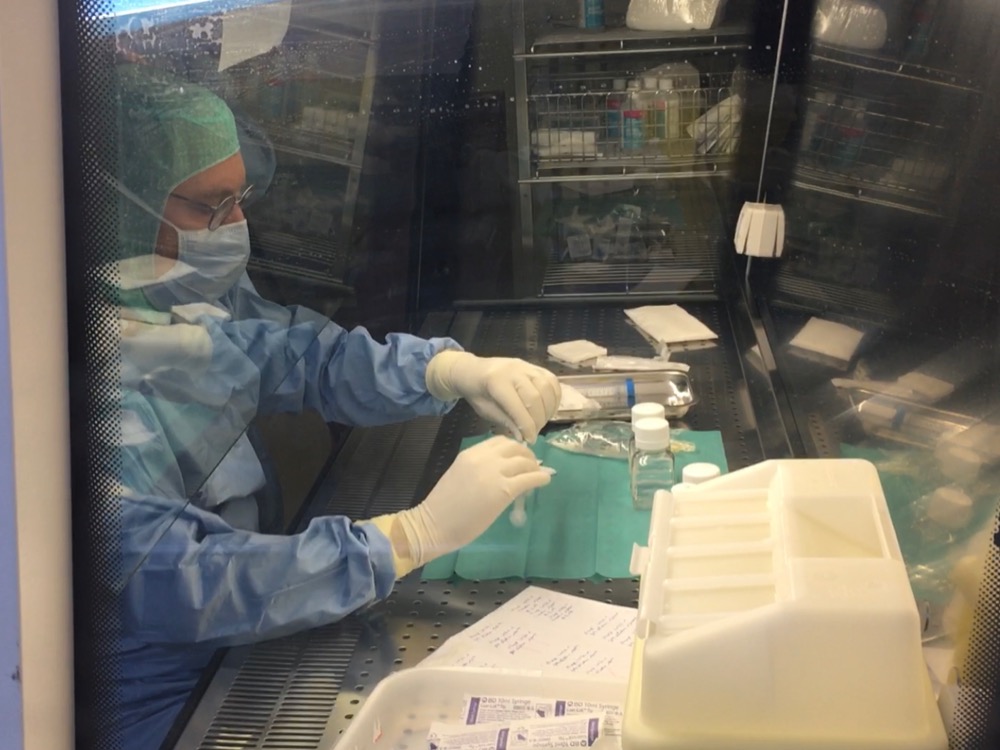 Preparation in a biosafety cabinet, in sterile conditions, of a personalised cocktail of bacteriophages in magistral preparation form, by the hospital pharmacist (Photo T. Ferry).

What are the contraindications and risks?

As no therapeutic trial has been carried out to date in France, the risks and effective doses are poorly known. This is why this type of salvage procedure is proposed, in exceptional situations, during Multidisciplinary Team Meetings.

Follow-up of this type of treatment is identical to that of all other bone and joint infections, with particular attention to the risk of occurrence of previously unknown adverse events (fever, chills, immunisation, development of antibodies against bacteriophages) and possible relapses.

Why is it not possible to generalise this treatment?

For this treatment to be generalised, it is necessary to look for several phages in the environment that would be active against target bacteria (phage discovery) in order to build “bacteriophage banks”. It is then necessary to be able to finance production and purification according to European standards of Good Manufacturing Practice. And finally to carry out therapeutic trials in the field of bone and joint infections, in each of the potentially relevant indications, to demonstrate scientifically that phage therapy can provide a benefit.

The entire CRIOAc Lyon team, with the institutional support of HCL, Fondation HCL, université Claude Bernard Lyon 1 and CIRI, wish to further develop phage therapy. However this research is complex, and would require an investment of all the actors involved, especially the establishment of an academic (i.e. not-for-profit) bacteriophage bank covering the main bacteria involved in BJI, and in fine to propose therapeutic trials. You can discover PHAGEinLYON, and become an actor by supporting this project by clicking HERE.