Medical therapy usually follows a surgical procedure; bone and/or joint samples are able to be taken at that time in order to identify the bacteria responsible for the infection.

An empiric therapy is often proposed, usually intravenous broad spectrum antibiotic therapy. That is to say, it generally covers most of the bacteria responsible for BJI, , often administered by PICC-line (“Peripheral Inserted Central Catheter“). The PICC-line is placed in an arm before or after surgery. Ultrasound is used to guide insertion of a needle into a vein with a large diameter. No particular complication is described resulting from the placement (the occurrence of a haematoma is rare, as PICC-line placement is authorised in patients taking an effective anti-coagulant treatment). This system is less invasive compared to conventional central venous lines, and facilitates the administration of antibiotics that cannot be administered permanently on a small peripheral line. It must be visible under an occlusive dressing, and can be kept for several weeks or even months. 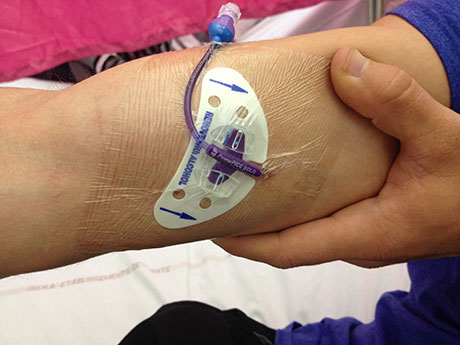 Patient with a PICC-line inserted in the right arm, allowing for the administration of intravenous antibiotics (Photo T. Ferry). 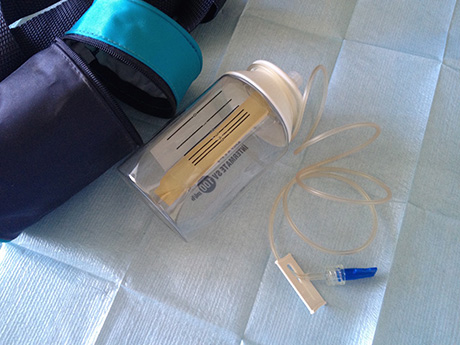 Two to three weeks after surgery, a stay in the Day-Hospital is usually organised to adapt the antibiotic treatment to the results observed in the bacterial cultures. The PICC-line is then either kept in place, if intravenous antibiotics are to be continued, or removed if the infection can be treated with oral antibiotics alone.
If the PICC-line is kept for a long time, it may become clogged or infected. Some patients may develop an allergy to the dressing and may need to have it changed.
Patients can have antibiotics intravenously administered by PICC-line at home, by discontinuous perfusions (infusions lasting 30 minutes to 4 hours, several times per day) or by continuous perfusion (24 hours per day), thanks to disposable infusion pumps. Infusion pumps are small plastic devices that are refilled with antibiotics once or twice per day and can be carried around the waist.

If the PICC-line has been removed, the infectious disease specialist may suggest that certain antibiotics be administered subcutaneously. This route of administration is not “conventional” nor officially considered “authorised” by the health authorities, due to the lack of studies demonstrating its safety. However, subcutaneous administration is relatively equivalent to intravenous treatment, without the need for a catheter. The antibiotic is then administered under the skin at the thigh or abdomen, 1 to 2 times per day, using very small needles, left in place long enough for the infusion, i.e. 30 to 45 minutes. The antibiotic, usually diluted in a 50 mL pouch, infuses under the skin via gravity. At the end of the infusion, light swelling may be visible. The antibiotic infuses into the body in a manner almost equivalent to intravenous administration; it then penetrates the bone at the site of infection. In order to ensure proper exposure to the antibiotic used with this innovative mode of administration, blood samples are taken before and after infusion, as a safety precaution, to quantify the amount of antibiotic in the blood, and then deduce the amount of antibiotic that finally reaches the bone. 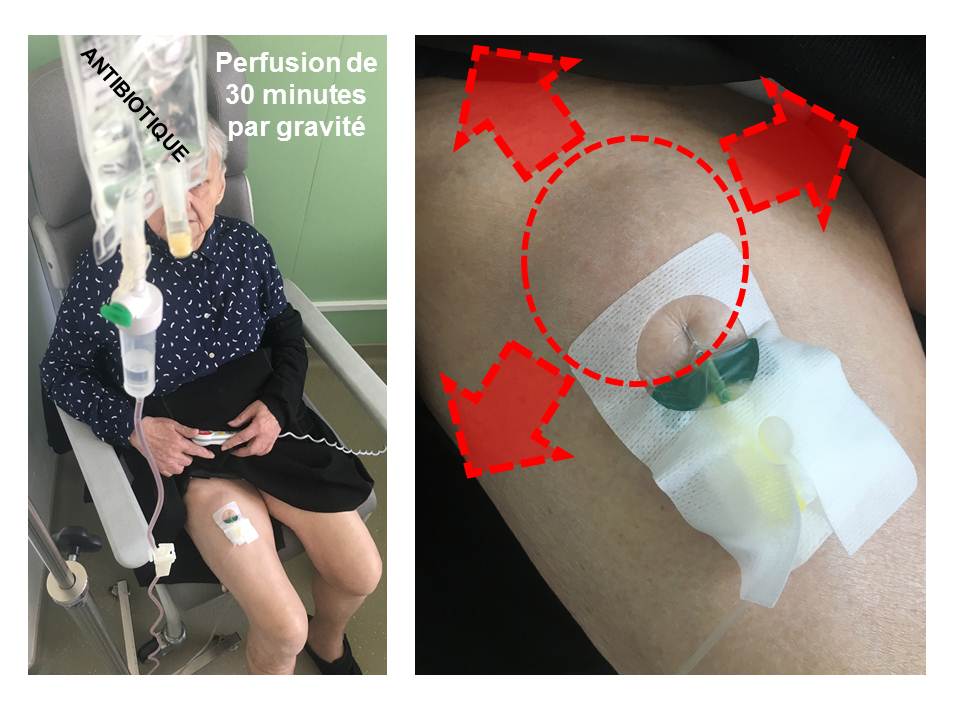 Subcutaneous infusion in the right thigh in a patient with recurrent infection of right hip prosthesis (photo T. Ferry).

The total duration of antibiotic therapy is generally 3 months. It can be shorter (6 weeks) or longer (6 months), or in extraordinary cases, be prolonged even further. The duration is defined by a certain number of criteria, in particular by the type of infection (implant-associated or not), by the germs involved, and by the surgical treatment that was performed. During antibiotic therapy, 15% of our patients develop a “serious” adverse reaction, which may require the treatment to be stopped or modified. These adverse effects may be due to an allergy, for example appearance of erythema, or may present as toxicity (always reversible) in the kidney or liver, detectable by regular blood tests. During the course of antibiotic treatment, the patient is regularly monitored by an Infectiologist, who will be reactive in the event of an adverse reaction and decide whether to stop or modify the antibiotic treatment. When serious adverse events occur, they are systematically reported to the Centre Régional de Pharmacovigilance.